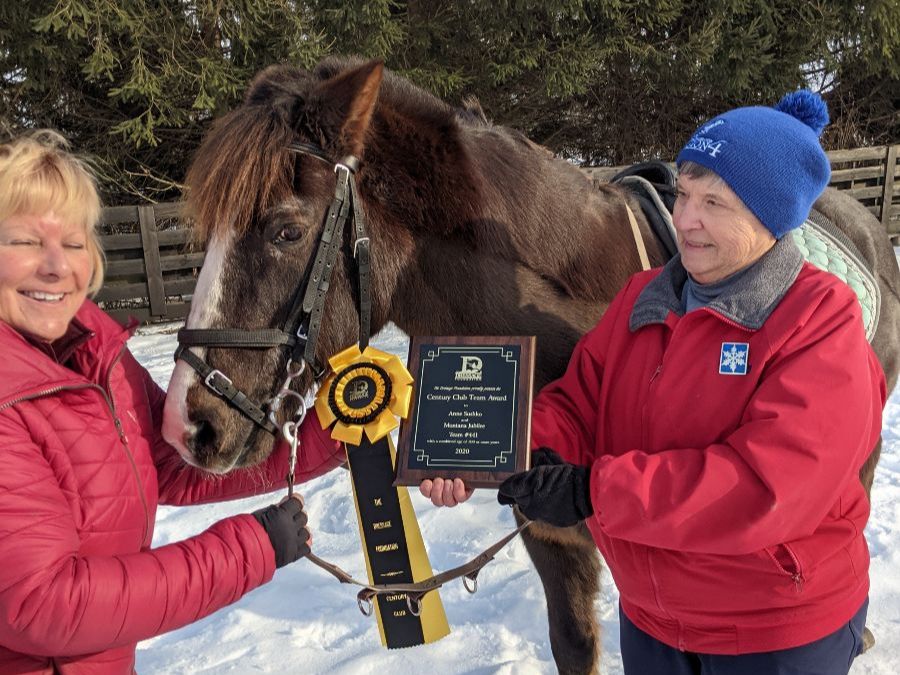 “Don't ever let people tell you that you are too old to ride,” says Anne Sushko, the USDF Region 4 Director. “Remember that every day is another opportunity to move forward, be it with giant steps or little ones.”

Not everyone starts riding horses when they’re in their adolescence, but you’re never too old to get in the saddle!

The Dressage Foundation’s Century Club celebrates riders and horses whose combined ages are 100 years or more. The duo performs a test of any level at a school or event and are scored by a dressage judge or professional. The Century Club was formed in 1996 in Lincoln, Nebraska, making 2021 its 25th anniversary. In 25 years, it has amassed almost 500 members! Any individual in North America is able to join this esteemed group after successfully completing their test.

This club is a reminder that there are amazing dressage riders of all ages and that age does not have to be a limiting factor. Even throughout the difficult year of 2020, 48 teams were still able to join the Century Club, with the oldest team having a combined age of 108. The oldest inducted member ever into the Century Club was 95 years old. However, there are many great examples throughout the world. One of the oldest Olympic competitors was Arthur von Pongracz in the 1936 Summer Olympics in Dressage at the age of 72 years old. More recently, Hiroshi Hoketsu competed in the 2012 Summer Olympics at the age of 71.

Anne, an Omaha Equestrian Foundation board member and supporter, was the 441st individual inducted in 2020 with Montana Jubilee, a Morgan Stallion owned by close friends, Deb and Doug M’Gonigle. Their completion of the Dressage test in August of 2020 made Anne the first Century Club rider from Iowa! Anne started taking riding lessons at a local private school’s stable at the age of 11 and periodically rode until she was 15 years old. She then took a 22-year break!

“My daughter asked for lessons when she turned 10. I assured my husband that I had no interest in riding again – but it only took one time of watching her ride and I signed up for my own lessons,” says Anne. “The next year we bought a 2-year-old Thoroughbred, and that was the start of 33 years of owning horses.”

Many of Anne’s favorite memories revolve around sharing her first horse with her daughter. They evented and participated in dressage and hunter/jumper shows until she went to college. Three years ago, Anne and her husband even traveled out to Colorado to watch their two granddaughters compete at the Colorado Horse Park. Now, Anne continues to take periodic lessons on Montana Jubilee and has since been able to buy his brother, Forsite Obsession (Obie).

Members are awarded with a black and gold ribbon upon completion of the test and later sent a plaque to the new team. For Anne, the induction into the Century Club completed an important bucket list item. However, one of the best parts of joining a program like this is the opportunity to find a community of friends and colleagues. While the Century Club does not have dues, meetings or an agenda, many teams keep in contact with each other through other means.

“What greater privilege can there be then that of helping others attain their dreams? This is what the Century Club does for so many mature riders. Dream supporters!”

Do you know a seasoned rider who might qualify to join the Century Club? Let them know about the opportunity! You might run into Anne in 5 years when she goes down the centerline on Critter, her Arabian Cross, and then again with Obie a few years after that.