The Finals return to Omaha, April 4-8, 2023. It will be a chance to see the best Jumping horses and riders from around the world (as well the best in Dressage and Vaulting), so go online at Ticketmaster.com and book your tickets to be there right now!

“When you go first [in a jump-off of this size], you're either first, second or third. I prefer to be first and I wanted to try to put it away early,” Swail said. “I was going to do what my strengths are. My plan was to be fast [and not] leave the door open.” 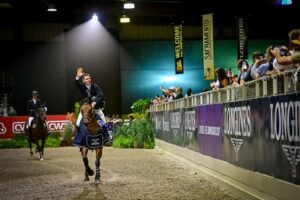 Swail earned 20 points for his victory to take an early lead in the NAL standings. Siegel is next with 17 points and Dean follows with 15. The North American League continues with seven more qualifiers between now and March with the Washington International Horse Show up next on October 29.

The FEI World Cup™ Finals return to the CHI Health Center Omaha next April 4-8. Featured will be Finals in Dressage, Jumping and Vaulting, marking the first time ever that the FEI Vaulting World Cup™ Finals are being held in North America!

All-Session and single-session tickets are on sale now via Ticketmaster.com. Included at the Ticketmaster.com site are options for VIP and hospitality lounge passes and fully catered ringside tables for the duration of the entire event. Don’t wait, order your tickets today!